The past couple of days have been tough. I’d been in Bangkok for five days and hadn’t really met anyone. A half hour chat with a guy at the floating market and a bus trip with a woman and her husband, although fun, don’t equate to friendship or a well rounded travel experience.

Khaosan Road is a bustling, hotter version of a festival. Epic if you are equipped with chums, pretty bloody lonely if you are going it solo and you haven’t met a kindred spirit to share in the buckets and the laughs.

That’s not to say I havent had fun. I’ve seen temples and The Golden Mount, tried street food and gone to the floating markets, had a tuk tuk ride and avoided a scam, swam in rooftop pools, drank cider, navigated the city on my own (a mean feat for someone with this bad a sense of direction!) and discovered a great pizza place (which is a big deal for me as anyone who knows me will attest to).

But, it was time to move on. The capital had started to turn my travel bug into flu and the ailment was home.

I wanted to go home to my friends and family, to Bristol, comfort and salad! The citizens of Bangkok don’t seem to know what a vegetable is, you are warned against eating fruit and salad because it may have been washed in the water and everything is fried in a kilogram of grease. I was greasy, spotty and feeling bloated. Throw into the mix the fact that a generous handful of my close friends are going to a gig I would die to attend this coming Saturday and a spare ticket just became available, and I was ready to pack it in and head for the rolling green hills of England. 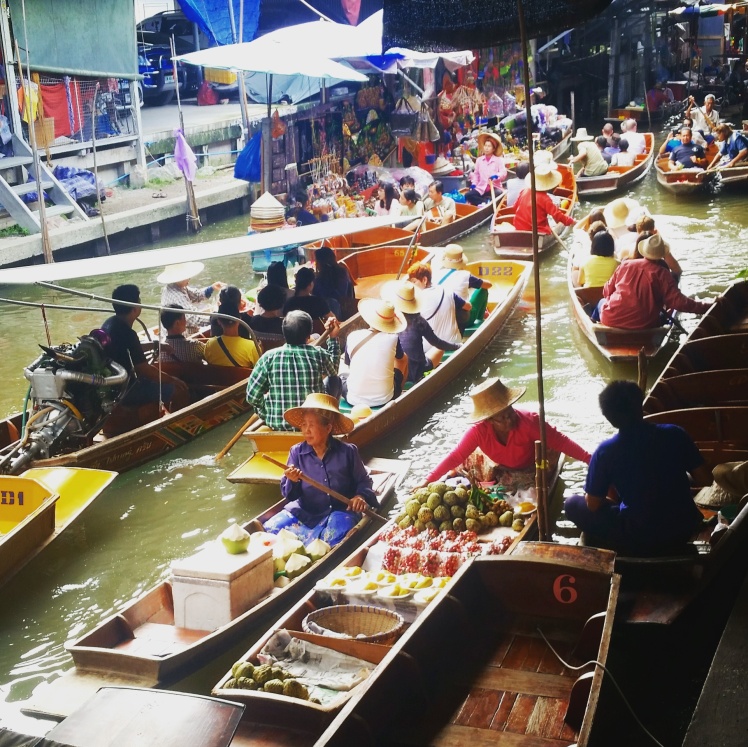 I had a stern word with myself and remembered why I was doing this. It was never going to be a breeze from start to finish and I couldn’t just run home because I was struggling. I decided I needed a change of scenery.

I brought forward my trip to Kanchanaburi. Waterfalls, elephants, rivers and trekking. I arranged to meet a girl in a hostel here via Facebook last night, stopped at a travel agent on my way to dinner and booked a bus out of Bangkok for 200baht (less than £4).

I’ve been here about an hour, chilling in the reception as it was too early to check in to my room and in that time I have already had my first encounter with a cockroach (which for the record, don’t phase me), the nicest orange juice I’ve ever tasted and met a girl from Vietnam who knows two of my best mates from home.

The garden is massive and beautiful, they are playing chilled jazz in the waiting area and you can hire bikes (those lessons will come in handy!). Something tells me this place will be different.

Loneliness and homesickness is a real thing on the road but I have to embrace the bad with the good, not give up at the first hurdle and instead, take a step back, reassess my plan and make a change. That’s the beauty of travelling with no plans or commitments. So what if I haven’t done everything on my Bangkok bucket list? It will still be there for me to go back to or maybe, it just isn’t the place for me.

11 thoughts on “From Bangkok to Kanchanaburi. Moving on: A Lonely Girl’s Guide”