Back in clinic with the babies! My favourite rotation.

This was another full on week! Whoever said never work with children or animals forgot the most manic option of all: infant animals…. the definition of a handful! 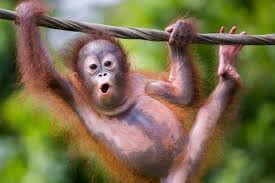 The week was crazy! Poor little Archie (my favourite little fuzzball) was sick all week and Goman and Uniko each had a turn with their tummy’s too at one point.

The week was jam-packed. Day one and I was on fruit duty; preparing the bananas, papaya, Jack fruit and greens for the orangutans feeding times. I grabbed a bunch of bananas and starting to rinse them in the sink… a giant spider ran out of them! Then, after freaking out for a bit, I grabbed another bunch and the same thing happened! That was it, I (and my fellow arachnophobic co-worker, Alex) were off of fruit duty for the rest of the week.

On the second day we came to work and a cute little bat was hanging from the kitchen gate. Hairless and a little dishevelled looking, he wasn’t keen on our constant opening and closing of the door disturbing his slumber!

On Wednesday we had to weigh the babies again. They looked so sweet in the little weigh in basket. Uniko, the new baby, was a little concerned about what was happening but everyone else just sat there calmly and waited to be tsken out to play.

That afternoon whilst preparing to take the food and milk in to the babies, Ceria, (the orangutan people make a wide berth of) came around the corner. Alison and I ran, but we were so busy worrying about where Ceria was that we didn’t see each other and ended up bouncing off of each other like Tweedle Dum and Tweedle Dee!

Then whilst putting Bidu-Bidu (my adopted orangutan) away for bedtime, he tried to grab my glove. I whipped my hand away thinking I had successfully avoided the missing glove instance that befalls us all almost daily and then whilst I was locking his cage he hooked his finger underneath the glove and ripped the seam from there. The elastic pinged back and snapped on my arm (ouch) and he had a glove!

Matamis, one of the semi-wild orangutans, was in the clinic having treatment do dog wound bites she had suffered from sleeping on the ground. She seems to be getting a little better now.

The afternoon of the next day was hilarious. Suddenly four of the big boys came in running riot: Poogel, Ceria, Sen and Boodie-Man. Fighting, stealing food, racing, climbing with the babies, rolling around on the floor, causing chaos near the kitchen… manic! Whilst this was happening and we were all distracted, Peanut and Bidu-Bidu made their escape. They shot off down the jungle gym and up on top of the outdoor cage out of reach. We had to coax them down with bread and the help of a ranger.

When we took the babies back to go to bed Washi and Sepilok were having none of it. They refused to go in, crying and grasping to us with all their might. This is really unusual as they normally get themselves into a state whilst climbing and want to come back early.

Finally all were safe and sound tucked away and we thought it would be peace and quiet…. Bidu-Bidu grabbed Alex’s glove… again and then started throwing banana skins at him through the cage! What a day!

The next day we had a big tropical storm so we didn’t take the tiny ones put because of their immune system. Instead, we got to bathe them! Archie, Koko and Uniko… it was the sweetest thing ever! We bathed them in the little sink and then dried them off with a big fluffy towel ❤❤.

Uniko came out morning and afternoon on our last day. She seems to be developing with regards to her fear of the other orangutans and humans waning. She is starting to bond with the others better now and gaining confidence everyday. She has the most beautiful long hands and fingers, very graceful and gentle.

Saying goodbye to Archie, Koko, Ospie, Sepilok, Washi, Goman, Bidu-Bidu, Peanut, Musa and Uniko was really hard! At least I will get to have one of them in picture day next week but it is difficult knowing I won’t work hands on with them again.