There is a legendary motorbike loop on the backpacker circuit in Laos that starts in Thakhek. I first heard of this from my Dutch adopted family who had all done this in the month prior to our adventures in Vietnam together. It sounded awesome. I wanted to get involved. 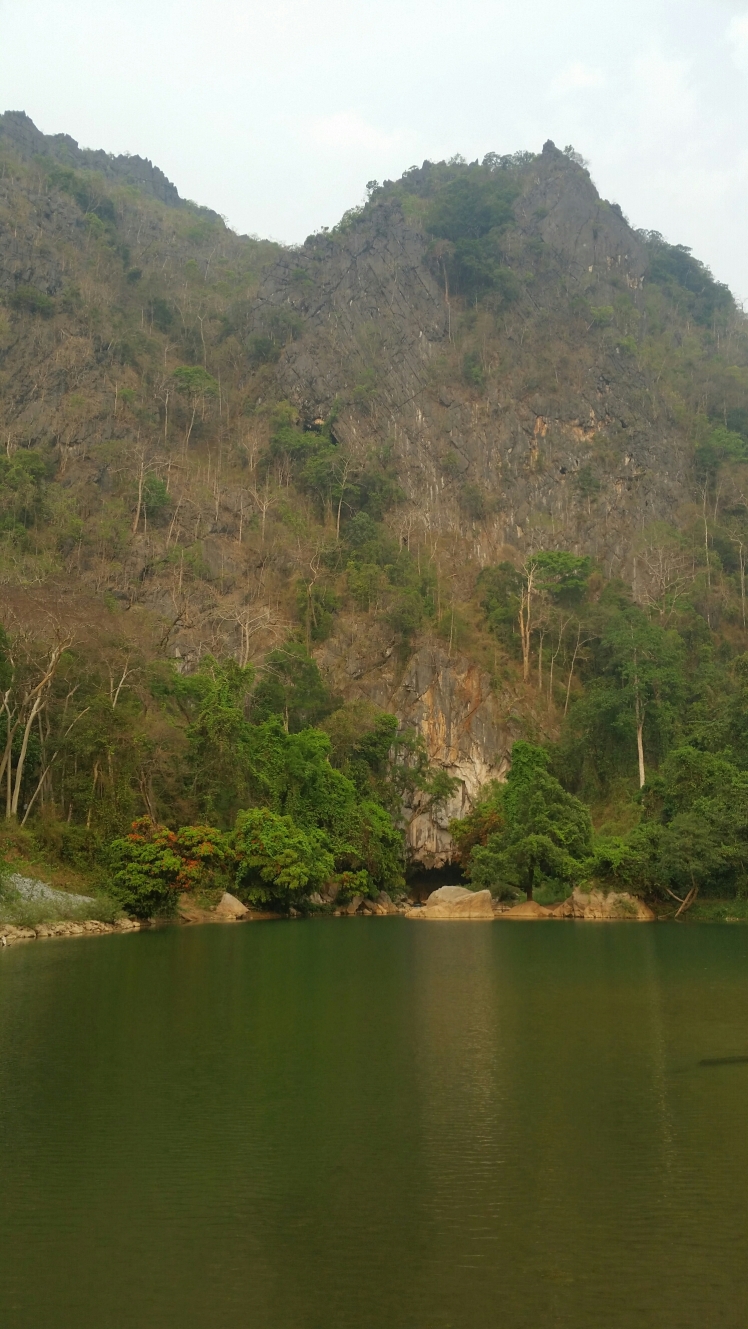 Now, as we have previously dicussed, I’m too chicken to drive a moped myself (don’t drive, have no road awareness skills, possess too much anxiety… you know the score). I needed to find a buddy. Someone I could hop on the back with in exchange for split costs and witty banter. If I didn’t find that certain someone, I wasn’t too bummed, I am doing a loop in Thailand with a friend later this month. But, I had to see the Konglor Cave.

To quote the Bible (my Lonely Planet):
Situated in the 1580sq km wilderness of Phu Hin Bun National Park, this 7.5km tunnel running beneath an immense limestone mountain is unlike anything you can imagine. Puttering upriver past frolicking kids you suddenly witness the gaping mouth of the cave, your breath stolen before you’ve even entered the eerie, black cavern. Passing into the church-high darkness (100m in some places), watching the light of the cave mouth recede, is an uncomfortably spooky experience. As you moor up the riverbank, wandering through a stalactite wood, you feel like you’ve wandered into an old Star Trek set, your water bottle spiked with LSD.

GET ME TO THAT CAVE!

I waited a night and a day and my bike buddy never showed and so, at 0730am, I boarded a bus to Konglor.

“The largest spiders in the world were found in the caves in Laos” they said*. “Have ’em at me!” I say (after shuddering and freaking out that they are on me).

After five hours on a local Laos bus with sweaty leather seats and no air con, I started to get antsy. I was sure we should have been getting close by now. I turned on my GPS, opened maps.me (a life saver by the way travel folk) and found that in fact we seemed to be going in the wrong direction for my destination. In other words, they hadn’t told me when I had to get off and now we were miles down the road! I hesitantly crept to the front of the bus to ask if I should have got off for Konglor already to be met with a chorus of laughs from the whole bus. The answer of course was yes. They decided it was appropriate to drop me at the side of the road and hail down an oncoming vehicle to take me back to where I should have got off initially. I then had to wait there for a further half an hour before getting a songtel/songthaew (depending on where you are in Asia) taxi for the last hour to Konglor. This dropped me at a dusty, dishevelled looking guesthouse still 1 mile from town. The taxi driver was evidently working with the guesthouse to get him business as all English was suddenly forgotten when I expressed that I needed to go into the centre.

Reluctantly, I dragged my aforementioned bastard bag the rest of the way down the dusty trail to a guesthouse with a beautiful private room for 60,000kip (£5 approx). 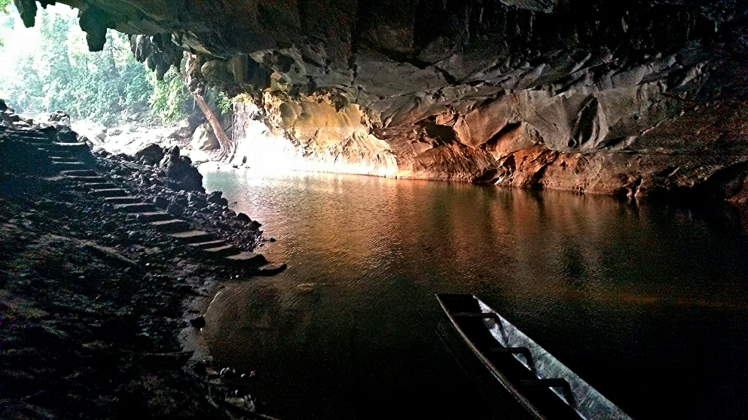 The cave itself was incredible. A long tail boat ride through a subterranean river inside 7.5k long cave. At one point, we moored up to a bank and I was left to wander through this Alice in Wonderland esque land of stalagmites and stalactites alone with nothing for company but my head torch…. a little creepy! In places, we had to get out of the boat and push it; up a waterfall, over some rapids, through a shallow stream… we then emerged out the other side of the cave amongst the mountains, following the river downstream whilst the sun set (and I didn’t see a single beastie).

That night I slept better than ever. I was in the world’s best bed and for the first night in a long time, wasn’t in a dorm. You really come to value your privacy and the silence of your own company when the norm is ten other people snoring next to you. Due to my short time frame in Laos I am on lengthy bus journeys almost everyday and it’s sincerely taken it out of me. I was pooped!

Awake again at 6am (but feeling refreshed after sleep for once) for my 0630am Songtel/songthaew back to Thakhek.

Now, I am under the impression that this will work the same way on the return journey as it did on the way to Konglor and I will get off at the taxi rank and get a bus back to Thakhek. I was wrong. Oh, so very wrong.

For anyone who has never travelled in Asia, a songthaew is a glamourised pick-up truck with makeshift seats which are hard as steel and as narrow as your hand, hammered to the sides and a roof of tarp. At one point, there were 21 of us rammed in alongside 2 chickens, 3 car tyres, 4 enormous, industrial sized bags of rice and what looked like a whole months worth of shopping for one woman. I am the only white face in this “taxi” and everyone is pointing and laughing at my white legs – the curse of the ginger. Did I forget to mention, this journey is five hours long? Due to the nature of the vehicle, every bump in the road sends us flying a foot into the air and we are on off the beaten track, mountainous, pot-hole ridden Laos roads. 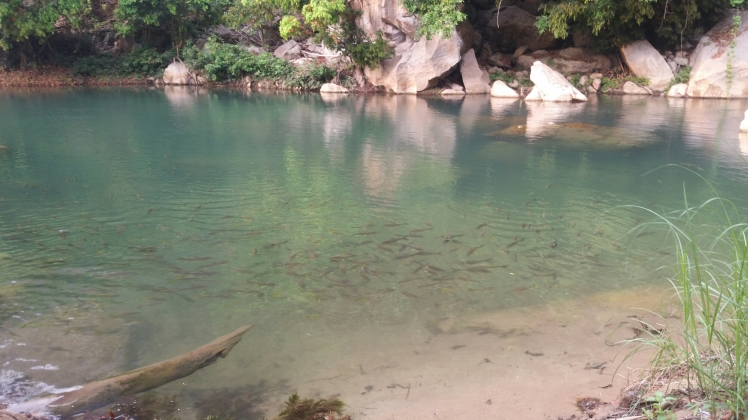 Least fun I’ve ever had in a pick-up truck. “Just think of the story” has become my mantra as I sit staring at the view and trying to pretend I’m on a moped, a daydream cut short when simultaneously a man stands on my foot and a woman pulls my hair as we are thrown over a bump lifting from our seats. 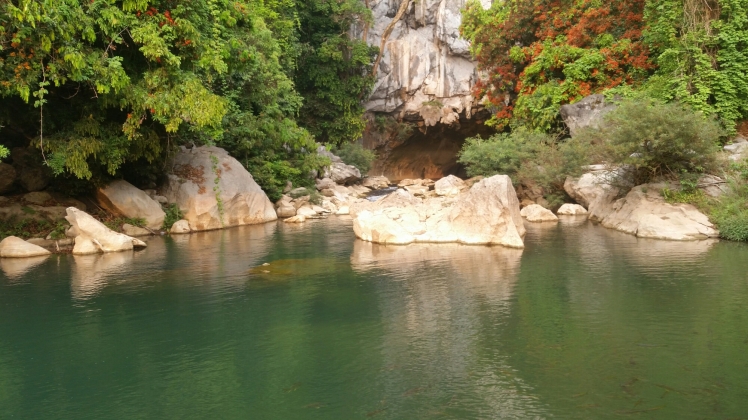 People start negotiating money ten miles outside of town. I am yet to know the cost and no one speaks English. Everyone is looking at me. Something from the back of my anxiety addled brain seems to push the figure 75,000 at me so I thrust 100,000 at the driver and hope for the best. Phew! Correct. Change received and we’re off, finishing the journey back where I started yesterday, little knowledge of the torture ahead of me.

So, was the cave worth the arduous journey to get there and back? I’ll let you know once the feeling comes back into my ass cheeks.

Now for a 3 hour journey to Savannakhet…. SAME DAY! Crumbs 😯

*Actually, it was me who said that to my A Team in Vang Vieng. We found a cave and like something out of As Above, So Below, descended into the abyss. That was when I remembered my dreaded fact about the eight-legged beasties and couldn’t be alone with the horror of it. Needless to say, facts shared, we made a swift exit.